TikTok, the Next big Thing?

TikTok has been touted as the next big social media platform off the production line (though it’s been around for a couple of years now).

It has grown in popularity in the UK with the recent Covid-19 lockdown and, with 795 million users worldwide and rising, it’s certainly worth a closer look for businesses that cater to a younger audience.

Here we take a closer look at TikTok, what it does, who uses it and how you might leverage its potential right now and in the future.

TikTok, the next big thing?

TikTok appeared in 2018 and hails from China where, until recently, most of its users also came from. It’s a similar app to Snapchat and Instagram and uses video exclusively. Users can make a 15-second video though there’s an option for 60 second-story style videos as well.

You might have noticed that TikTok gets used a lot for lip sync videos and is strongly connected to music. Users film themselves and add various filters, for example, changing their hair colour, or adding images while they mime to their favourite tunes.

Now that it is being used more widely, however, people are starting to use it for more than just singing their favourite tunes and there is a lot greater diversity on the platform.

As with other social media platforms, you can follow users, search for hashtags and subscribe to channels.

TikTok is definitely for the younger crowd and whether this will change as its popularity grows remains to be seen. The platform grew out of another online service called Musicall.ly that was targeted at Generation Z and almost exclusively focused on music.

According to the stats, 60% of users are under the age of 30 and more females use it than males. Influencers have gravitated to the site and helped to begin to diversify the content in the last year or so.

How Can I Use TikTok to Market My Business?

When any new social media platform starts to gain popularity, marketers scramble to figure out how to leverage it.

It took many years for businesses to truly get the hang of Facebook and Twitter when these platforms first appeared.

As marketers, however, we are getting better at social media all the time. While platforms may have their little idiosyncrasies, one certainty remains: Social media marketing is not about pushing products, it’s about engaging with your audience.

Create Your Own Channel

The first step will be to set up a channel so that people can follow your brand. The nature of the video content on TikTok (short and entertaining) means that you need to think very carefully about what you are going to upload and how you want to engage with users.

Of course, this will vary from business to business but key to success is experimenting and measuring results.

As with Instagram and other social media platforms, there are a growing number of influencers on TikTok who have pretty large followings. Building a relationship with someone who already has a high profile on the site can be beneficial and quickly get you noticed. It’s not easy, however.

Influencers are pretty savvy so having the right approach is vital. Most won’t advertise a product that a) doesn’t match their brand and, b) isn’t of interest to their followers.

For example, you’re going to find it hard to get an influencer on board who wants to promote your estate agency business if most of their followers are 20-somethings who are more interested in the latest music trends. On the other hand, if you have a product that appeals to the younger generation, you should have a lot to choose from.

Charli D’Amelio, the most followed TikTok female in the world.

One thing that TikTok is certainly good for is user-generated content. If you can get people creating stuff that highlights your brand, you’ll reach a much wider audience in a short time. The good news about video on TikTok is that production values aren’t a big thing. Users are happy with amateur videos as long as they entertain.

One simple marketing approach is to encourage fans to post videos of them using your product. The key is not to be too precious about the quality. It’s something you are never going to have control over anyway.

Why Hashtag Challenges are Essential

Like most social media platforms, hashtags have proved pretty useful on TikTok. In particular, hashtag challenges have become a way for users to get involved. Key here is that people want an immersive experience rather than a passive one, where they can get involved.

It’s something that should be at the back of your mind when you develop any marketing strategy on the platform. Recent hashtag challenges that have captured the imagination include Colgate’s #makemomsmile challenge.

Another way to stand out on TikTok is through advertising on the platform so that your brand shows up on people’s timeline.

Unlike Facebook and Twitter, these are early days for PPC on TikTok and it’s by no means that efficient. It is something, however, your business might like to keep an eye on for the future. 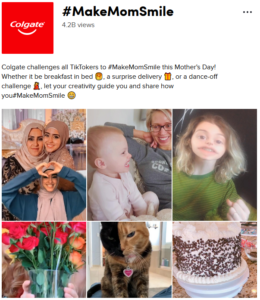 Is TikTok Worth it for Your Business?

The big question is whether your business can benefit from having a presence on TikTok. A lot will depend on what service or product you are offering and who you are targeting. With followings tilted towards the younger demographic, it will suit some businesses more than others.

Like any social media site, the key is to develop a strategy that works for the audience, measure results as they come in and calculate ROI to see if it is all worthwhile. With its growing popularity, however, TikTok is well worth a closer look.