Social Media Manager Ireland is proud to announce the sponsorship of Ryan Connolly for the 2020 League of Ireland season.

The ex-Derby County left-back recently signed for Finn Harps in the League of Ireland premier division from Galway United. Ryan began his career as a scholar in the Derby County Academy. Making his first-team debut when he was named as a substitute for Derby County's FA Cup 5th Round tie at home to Birmingham City in February 2010.

Despite taking a year out of the game Ryan said recently on the Finn Harps website:

“I’m buzzing to be given the opportunity by Ollie and Finn Harps to play again. After taking a year out I’ve never been more hungry to play and push on with Harps. I just can’t wait to get going.”

Marc Creighton owner of Social Media Manager Ireland said we are thrilled to be sponsoring Ryan Connolly fo the coming season and wish him the very best for the 2020 season and we hope he can push Finn Harps forward in their quest for European football.

Find out why we think sponsorship is important for your brand (and ours). 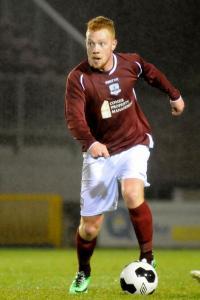